Renegade III – Where did it go wrong?

Now anyone who was a owner of any of the 8 bit computer systems knows that the renegade series were good, very good with exception of the ill fated Renegade III The Final Chapter. but what went wrong and how did it go so wrong well lets look at the game in a bit more depth and see what we can find, people brace yourself

Story
Now the story of the first two Renegade game is very simple, in fact you could turn around and say its pretty standard for a lot of scrolling fighting games that came out during that time, kidnapped girlfriends, murdered family members, someone kidnapped your gran yadda yadda yadda but time travel, oh come on who would want to travel back in time and kidnap your girlfriend, what would that do, what would that achieve and I am pretty sure someone from the future would not have a clue of his existence. Perhaps it was their attempt to change the future into … NOOOOO its just too far fetched and it dose not work. Perhaps if there was a deeper story line then maybe..but we cant get that because of the limited capacity of games at the time, as far as story telling goes I can describe the Renegade trilogy like the Lord of the Rings but only if The Return of the King was written by Stephanie Myers you know the one were Renegade sparkles, just look at the cover arts she would love him as hes always got his chest out. 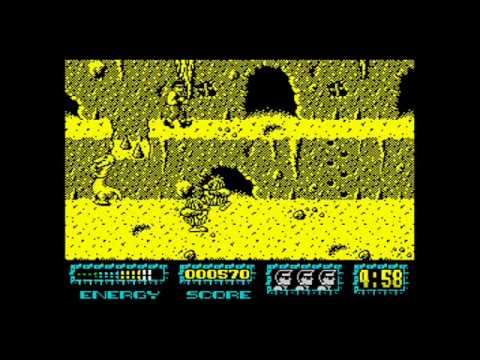 Gameplay
With such a good move set that really made Target Renegade work like a dream as a fighting game why change what was not broken? But for some reason they put in a new control system to which in my own honest opinion broke the game and made it too easy to finish on the Spectrum and Amstrad version. All you had to do was keep duck punching and you would never get hit. I am not to sure if it works on the C64 version but what lets the game down in another areas is strict time limits, jumps that are just awkward to pull off, the fact you do not have to fight any of the enemies until you get to a certain spot then they all swarm and mob you. admittedly the one bit of AI that remains is they surround you but they seemed to have inherited the C64’s refusal to fall over problem from Target Renegade, it did not work then and it dose not work now, as it eliminates you ability to “hit em while they are down” and possible speeding up you progress in the levels against that horrid time limit. and where are the weapons? Now i remember you can pick up the club on the c64 version but why would you want to when the duck punch was so effective and in essence shorten your range. So all in all the changes to the game play really did not help at all and one of the important things…where did my 2 player mode go? Come on people Target Renegade had 2 players, well the C64 version did not but now saying that I am seeing that this game has leaned towards the way Target Renegade played on the C64 but that is not always the good thing as many of the old school fans will tell you.
Lets get onto the other part on the lay out of the game, now there was only 4 levels and as I said before you was on a punishing time limit, and if you could get any more generic bad guys then they are all here at this party, the zones are prehistoric, Egypt, Medieval and Future, what no stop by in the present so you can drop by Mr Big’s place and give him another kicking? But hey if you want to add a few more stages how about Feudal Japan or world war Germany, hell this game dose not follow anything to a real story line so it would not be out of place and the thought of Renegade fly kicking Adolf Hitler in the head come on you have to admit sounds awesome. But the enemies are generic to the time periods and the thought of a T – Rex wanting to fist fight you is in all aspects laughable but hey they are consistent. 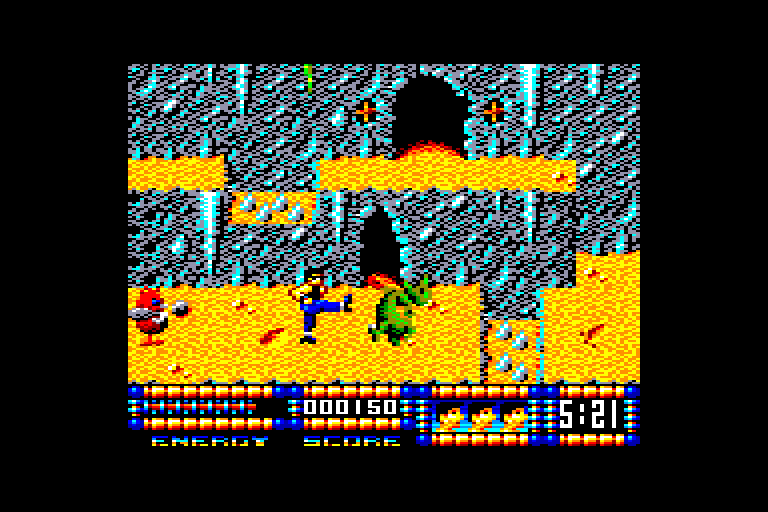 Music
I would go onto talking about the music in the game but its done by Jonathan Dunn and is pretty good so at least its scored a point back.

Graphics
Well again this is one of the games actual better points because the graphics are actually not bad at all on all three systems, they get the job done and you get the feel of what time zone you are no matter your system of choice, the Spectrum’s two colour system and the Amstrad and C64’s colours give the game the feel of time travel to ancient times to go fist fighting with captain caveman and the knights of ye old England, which in all honesty you should be pulling out your swiss army knife and attacking them with a can opener.
Anything Else
So why did so many people fall into the trap of buying this average game, I will be honest its not terrible as the game is playable but extremely easy due to a very poor combat system, and yes the C64 version has the harder challenge due to the fact your energy depletes slowly over time unless of course your kicking the hell out of everyone to keep it sustained. But what was the key here I believe was the reviews that were given by magazines and several gave it a score of 90 plus, now this is a time with no internet, we could look up an get the people reviews on it and our choice of gaming was heavily influenced by magazines like Crash and Zapp and even though Julian Rignal himself says they were never bribed just treated really well which to me means the odd game did get that little better treatment when it should not of done, or could it have possibly just the companies attempt to do something a little different, which at the time got the attention of the magazines but after it went to the press they had a change of heart and realized it really was not that good after a longer playspan, but that was over 20 years ago and we may never know because it was that long ago and now wiped form their memories.
Conclusion
Renegade III The Final Chapter was not a total waste, the graphics and music were good but it was only let down by shoddy controls and annoyances in the levels that really did not need to be there. there are the other aspects like the timer and unbelievable storyline but hey at least the storyline you can ignore but I will give possibly the best upside to it all……
…..The inlay image is a awesome piece of work….of course it is its a Bob Wakelin piece…. need I say more.

6 thoughts on “Renegade III – Where did it go wrong?”